Heiwa Real Estate owns over 50 buildings in major city centers across Japan, including the Nihonbashi Kabutocho areas of Tokyo, the Kitahama areas of Osaka, the Sakae areas of Nagoya, the Tenjin areas of Fukuoka, and the Odori Park area of Sapporo. 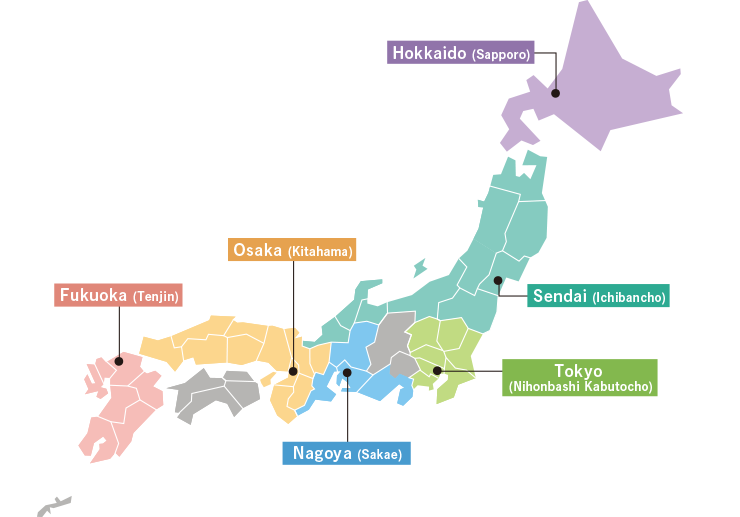 Home to the Tokyo Stock Exchange, Nihonbashi Kabutocho is well-known throughout the country as a stock trading district, and is also where the Heiwa Real Estate (the Group) was founded and currently has its headquarters. The Group owns several buildings in the district, including the Tokyo Stock Exchange Building, Nisshokan Building, Kabutocho Heiwa Building No. 6, and the Tokyo Shoken Kaikan Building. The Group is working to revitalize an area roughly 100,000 m2 in the Nihonbashi Kabutocho and Kayabacho areas.

In Nagoya’s main commercial district of Sakae, the Group redeveloped the Nagoya Heiwa Building in 2004, the Nagoya Stock Exchange Building in 2007, CentRise Sakae in 2010, and the Maruzen Nagoya Honten Building in 2015. Through revitalizing projects aimed at enhancing the areas appeal, the Group has been bringing new energy to Isemachi Street, a major thoroughfare in the 3-Chome neighborhood of Sakae.

In Fukuoka’s Chuo Ward, many office buildings and commercial facilities as well as the city hall are located in Tenjin, making it an important district for the development of leased buildings along with the city’s Hakata Ward. Heiwa Real Estate owns several properties in the bustling area surrounding Tenjin Station, including the Fukuoka Shoken Building, the Fukuoka Heiwa Building, and the Tenjin Heiwa Building.

The city of Sapporo in Hokkaido Prefecture

Heiwa Real Estate owns the Sapporo Ekimae Godo Building and several other buildings in central Sapporo, which is attracting numerous companies. It also owns the Dogin Building and Shin-Odori Building in the Odori Park area, a major thoroughfare lined with financial institutions and commercial buildings.

In 2012, Heiwa Real Estate constructed the Ichibancho Heiwa Building as a new landmark in Sendai, the largest city in Japan’s northeast Tohoku region. Conveniently situated near the intersection of a shopping street leading to Sendai Station and Higashi Nibancho Street, a major thoroughfare, the building has attracted prominent commercial tenants and brought new energy to the city.

Data for Heiwa Real Estate’s property portfolio are shown in several charts and graphs in the Property Portfolio section under Business Operations.